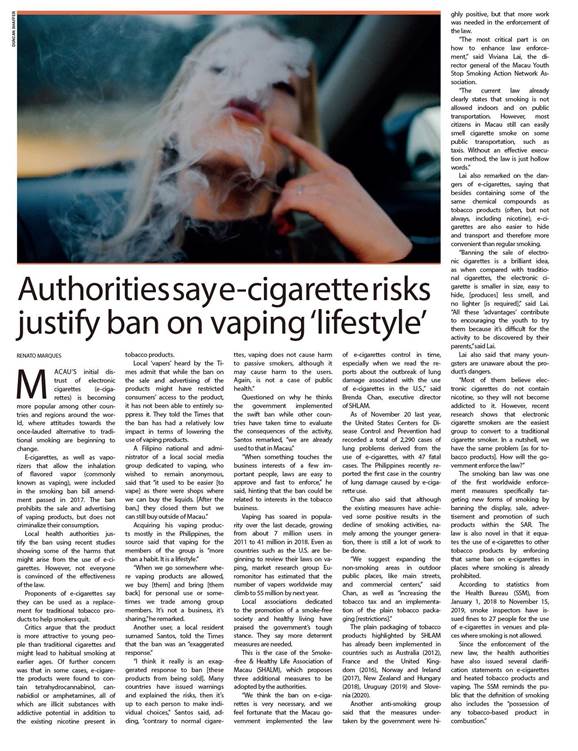 Macau’s initial distrust of electronic cigarettes (e-cigarettes) is becoming more popular among other countries and regions around the world, where attitudes towards the once-lauded alternative to traditional smoking are beginning to change.

E-cigarettes, as well as vaporizers that allow the inhalation of flavored vapor (commonly known as vaping), were included in the smoking ban bill amendment passed in 2017. The ban prohibits the sale and advertising of vaping products, but does not criminalize their consumption.

Local health authorities justify the ban using recent studies showing some of the harms that might arise from the use of e-cigarettes. However, not everyone is convinced of the effectiveness of the law.

Proponents of e-cigarettes say they can be used as a replacement for traditional tobacco products to help smokers quit.

Critics argue that the product is more attractive to young people than traditional cigarettes and might lead to habitual smoking at earlier ages. Of further concern was that in some cases, e-cigarette products were found to contain tetrahydrocannabinol, cannabidiol or amphetamines, all of which are illicit substances with addictive potential in addition to the existing nicotine present in tobacco products.

Local ‘vapers’ heard by the Times admit that while the ban on the sale and advertising of the products might have restricted consumers’ access to the product, it has not been able to entirely suppress it. They told the Times that the ban has had a relatively low impact in terms of lowering the use of vaping products.

A Filipino national and administrator of a local social media group dedicated to vaping, who wished to remain anonymous, said that “it used to be easier [to vape] as there were shops where we can buy the liquids. [After the ban,] they closed them but we can still buy outside of Macau.”

Acquiring his vaping products mostly in the Philippines, the source said that vaping for the members of the group is “more than a habit. It is a lifestyle.”

“When we go somewhere where vaping products are allowed, we buy [them] and bring [them back] for personal use or sometimes we trade among group members. It’s not a business, it’s sharing,” he remarked.

Another user, a local resident surnamed Santos, told the Times that the ban was an “exaggerated response.”

“I think it really is an exaggerated response to ban [these products from being sold]. Many countries have issued warnings and explained the risks, then it’s up to each person to make individual choices,” Santos said, adding, “contrary to normal cigarettes, vaping does not cause harm to passive smokers, although it may cause harm to the users. Again, is not a case of public health.”

Questioned on why he thinks the government implemented the swift ban while other countries have taken time to evaluate the consequences of the activity, Santos remarked, “we are already used to that in Macau.”

“When something touches the business interests of a few important people, laws are easy to approve and fast to enforce,” he said, hinting that the ban could be related to interests in the tobacco business.

Vaping has soared in popularity over the last decade, growing from about 7 million users in 2011 to 41 million in 2018. Even as countries such as the U.S. are beginning to review their laws on vaping, market research group Euromonitor has estimated that the number of vapers worldwide may climb to 55 million by next year.

Local associations dedicated to the promotion of a smoke-free society and healthy living have praised the government’s tough stance. They say more deterrent measures are needed.

This is the case of the Smoke-free & Healthy Life Association of Macau (SHALM), which proposes three additional measures to be adopted by the authorities.

“We think the ban on e-cigarettes is very necessary, and we feel fortunate that the Macau government implemented the law of e-cigarettes control in time, especially when we read the reports about the outbreak of lung damage associated with the use of e-cigarettes in the U.S.,” said Brenda Chan, executive director of SHLAM.

As of November 20 last year, the United States Centers for Disease Control and Prevention had recorded a total of 2,290 cases of lung problems derived from the use of e-cigarettes, with 47 fatal cases. The Philippines recently reported the first case in the country of lung damage caused by e-cigarette use.

Chan also said that although the existing measures have achieved some positive results in the decline of smoking activities, namely among the younger generation, there is still a lot of work to be done.

“We suggest expanding the non-smoking areas in outdoor public places, like main streets, and commercial centers,” said Chan, as well as “increasing the tobacco tax and an implementation of the plain tobacco packaging [restrictions].”

Another anti-smoking group said that the measures undertaken by the government were highly positive, but that more work was needed in the enforcement of the law.

“The most critical part is on how to enhance law enforcement,” said Viviana Lai, the director general of the Macau Youth Stop Smoking Action Network Association.

“The current law already clearly states that smoking is not allowed indoors and on public transportation. However, most citizens in Macau still can easily smell cigarette smoke on some public transportation, such as taxis. Without an effective execution method, the law is just hollow words.”

Lai also remarked on the dangers of e-cigarettes, saying that besides containing some of the same chemical compounds as tobacco products (often, but not always, including nicotine), e-cigarettes are also easier to hide and transport and therefore more convenient than regular smoking.

“Banning the sale of electronic cigarettes is a brilliant idea, as when compared with traditional cigarettes, the electronic cigarette is smaller in size, easy to hide, [produces] less smell, and no lighter [is required],” said Lai. “All these ‘advantages’ contribute to encouraging the youth to try them because it’s difficult for the activity to be discovered by their parents,” said Lai.

Lai also said that many youngsters are unaware about the product’s dangers.

The smoking ban law was one of the first worldwide enforcement measures specifically targeting new forms of smoking by banning the display, sale, advertisement and promotion of such products within the SAR. The law is also novel in that it equates the use of e-cigarettes to other tobacco products by enforcing that same ban on e-cigarettes in places where smoking is already prohibited.

According to statistics from the Health Bureau (SSM), from January 1, 2018 to November 15, 2019, smoke inspectors have issued fines to 27 people for the use of e-cigarettes in venues and places where smoking is not allowed.

Since the enforcement of the new law, the health authorities have also issued several clarification statements on e-cigarettes and heated tobacco products and vaping. The SSM reminds the public that the definition of smoking also includes the “possession of any tobacco-based product in combustion.”